Putting Your Code In the Right Place: A Brief Introduction to PRG Banking

We’ve gotten through the basics of game creation, but up to this point it has been mainly editing existing code. In section 3, we are going to find ourselves writing a lot more of our own code. It’s worth taking a little bit of time to understand where all that code goes, and how to avoid running out of space.

Why should I care?

The NES has a very, very limited amount of program memory (PRG) available for use. Without PRG banking, you are limited to 32 kilobytes of program data total. That is, 32,000 bytes for everything. All of your game logic, your map data, sounds and music. For reference, one game map takes up nearly a full 16kb. The game logic for the base engine also takes up nearly that much space. How then, can we make a full game within these restrictions?

The answer is PRG banking. The 32 kilobyte limitation only exists because the NES only knows how to address that much space. There is no way to tell the console how to run the code at address 32,001 because of the address mode it uses. (All addresses must be between 0x0000 and 0xffff, and there are other things besides the PRG memory in that space)

PRG banking gives us a way to take some code out of that space, and put other code in its place. As long as the processor is not trying to run that code, this works perfectly. Some functions will not be available, and some other functions become available. It’s more clunky than in modern operating systems, but it works.

Okay, I’m convinced. How is this laid out?

Basically, when we write our code, we have to tell it where to go, then make sure we have switched to the right bank before calling that code. The C library has some nice wrappers around this which make it easier to do.

The first thing to know is how the PRG memory is laid out. This can vary based on what type of rom you are making, but for our rom the memory is split into two 16KB pieces. One 16kb piece is referred to as the “kernel”. This kernel bank is always addressible in memory, and we put frequently used code into it. For example, the main() method is in the kernel, as are all of the functions neslib provides.

The other 16kb piece is referred to as the “switchable bank”. As the name implies, this bank can be switched to any one of the other banks we define. The default rom generated by this game has 8 banks; the first one is the kernel and the rest can be switched out. We allocate one bank for the map, and another bank for a lot of map and player code. One final bank is used to store music and sound effect data. This leaves 4 banks (mostly) free for your code and data. (The ROM can also be extended to have 16 banks; see part 5 of the guide.)

The library includes a tool for viewing available/free memory, called NES Space Checker (nessc). The makefile actually has a way to open this for you. Run make space_check and look at the program to see the results. Here’s an example with the base rom. (At the time of this writing) 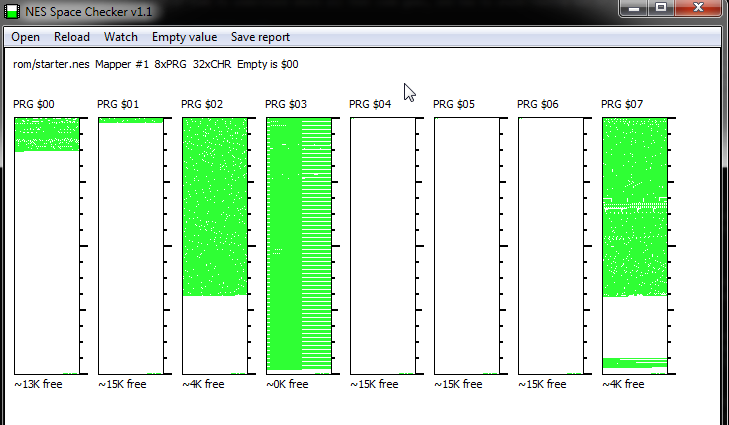 Great, what do have to do to take advantage of this?

The first thing to do is mark your new code with a bank id. That is a simple call to CODE_BANK(number), where number is your bank number. The CODE_BANK macro affects all code in the file below its declaration. You will have to reference this bank later when you call the methods in this bank, so it’s smart to use a constant for this. There is a quick example below: (You can see many real ones by searching for CODE_BANK in the project.)

The exampleData array and the do_example_things() method will both be in the 6th bank instead of the kernel, and we will have to call it using the banked_call() method. Continuing our example, here’s what that looks like:

This will trigger a special method in the kernel that will do 4 things for us, in order:

That’s it; that’s all there is to it!

Are there any caveats I should know about?

There are only two major caveats to this, but they are definitely worth knowing about.

First, there is a limit to the number of layers deep you can go with banking. If you call one banked function from another banked function, that is fine, but we have to keep track of each bank, and we by default can only track 10 prior banks. This can be increased by changing MAX_BANK_DEPTH in source/library/bank_helpers.h. (But it will take up more zeropage variables!)

Second, there is no easy way to pass through parameters to a method like this. That generally should be ok, as we want to stick to global variables where possible anyway. If you need to do this however, you can’t use banked_call directly. The last section in this chapter details how to get around that.

How can I make a call to a banked method with parameters?

There are some helpers built into our C library to run banked methods with parameters, but these are not quite as friendly as the banked_call method. If you need to do this, you will need to use the bank_push and bank_pop methods. These are (effectively) what banked_call does behind the scenes.

First, change the method in example.c to accept a parameter:

You will also have to change the header file to match.

Next, change the code in main.c to call the new method:

If you would like to look at a real example, the load_map() method in source/map/load_map.c does exactly this.